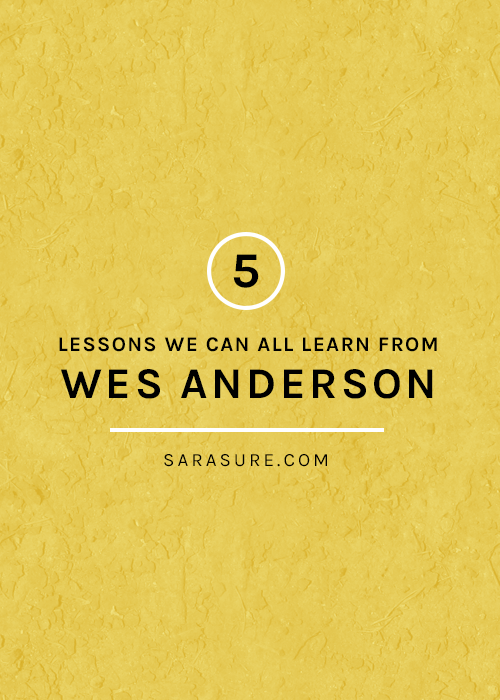 5 Lessons We Can All Learn From Wes Anderson

Whenever Wes Anderson comes out with a new movie, I'm always excited to be engulfed in the world that is uniquely his own. Speaking as a fan and a visual artist, I was thrilled to see his most recent movie, The Grand Budapest Hotel, receive praise from critics and success in the box office. Not to mention, 2015 was also a great year for Anderson in the awards department. In light of this much deserved success, I'd like to highlight five things we all can learn from Anderson while considering his visual masterpieces.

A theme that consistently sticks around in all of Wes Anderson’s films is the whimsical, charming, and always adventurous world of childhood. For example, in Moonrise Kingdom, the plot unfolds like a storybook complete with strong narrative and imagery often associated with adolescent activities like scout camp. To help illustrate this imaginative storyline, he uses superb color schemes, grand soundtracks, and bold costumes. All of which show off his love for stage plays. (Source.) Even his set design resembles that of a dollhouse for his characters to interact in.

What’s the takeaway here? The fact of the matter is that we should always embrace our inner child and never take ourselves too seriously. We may not want to remember everything, but it’s always important to dig deep and allow yourself to live within the nostalgia of what made your childhood memorable. Each adult was once an archeologist, oceanographer, and a cowboy/cowgirl playing pretend in a homemade fort of sheets. Anderson understands the importance of childhood; I'd take some cues from him.

If you've ever watched a Wes Anderson film, you might have noticed that he dresses his characters in uniforms and periodically accentuates their outfits with a prop of some kind. Sometimes his uniforms are official, and sometimes they're handmade, as if by the characters themselves. In Rushmore the central character, Max, wears a private school blazer with a patch he made himself. While in The Royal Tenenbaums, Margot sports a mysterious wooden finger. There’s a story behind each visual and all you have to do is watch his movies to see it unfold.

One of the best pieces of advice I've personally received is to create a go-to uniform for yourself. It not only makes you feel amazing, but it’s strangely comforting to know what to wear everyday. I've been doing this for a while now and my go-to outfits tend to change depending on the season. In the spring and summer, I'm usually in a dress with flats; in the fall and winter, I'll choose a pair of skinny jeans, a button up blouse, and boots. When I take on the world, you best believe it’ll be in one of these outfits!

One thing I admire about Anderson’s work is that he really gets character development. His characters are introduced in a style that is suitable to their personalities and in his world, the quirkier they are, the better. In fact, it’s a pretty bizarre experience if you discover a character that seems down to earth. It’s almost like they're involved in an inside joke. Take Henry from The Royal Tenenbaums for an example. He’s a dependable, upstanding man who asks for Ethyl’s hand in marriage and is by all means the exact opposite of her selfish, con man of an ex-husband, Royal Tenenbaum. However, there’s a reason why Royal’s the central character. It’s simply because he’s got enough baggage to form a story about him and his dysfunctional family. Anderson uses all of this animosity to explain the unapologetic nature of each personality and has a knack for making the most awkward situations humorous.

So embrace all of what makes you, well you. As I've gotten older, I've realized that the little things that used to embarrass me really don't matter anymore. For example, when I was a teenager I would have never admitted that I had a pink Power Rangers bathing suit in elementary school and wore it while I pretended to fight crime with my friends. Sometimes I still have trouble admitting that I have a tendency of twirling my hair when I'm deep in thought. These are just a few of my quirks that I've learned to embrace and when I reveal them to people they tend to laugh. But hey, that’s okay! With age comes security and self confidence. Besides, whatever makes you quirky, just makes you interesting and relatable.

Anderson has been known to be the “most meticulous film director alive.” (Source.) This is due to his technical precision and the personal involvement he puts forth in just about every film he makes. For The Grand Budapest Hotel, he hired graphic designer, Annie Atkins to help create authentic-looking 1930s and 1960s period pieces for the fictitious State of Zubrowka, a European country that eventually gets taken over by the Nazi regime. Her body of work ranged from telegrams, police reports, newspapers, packaging for a “local” patisserie, currency called Klübecks, and more. Throughout the creation process, each piece had to be approved by Anderson himself. (Source.)

Another example of the director’s perfectionist tendencies is his adaptation of the Roald Dahl children’s book, Fantastic Mr. Fox. Anderson chose to portray this through the meticulous process of stop-motion animation, where the figurine characters are moved ever so slightly and are photographed, frame-by-frame to create motion. If you've ever watched Coraline or the Corpse Bride, these were also done with the same process. (Source.) It’s an extremely precise process that requires a great deal of time.

What can we learn from these two films? When you pay attention to detail, it not only ensures quality, but the ending result can turn out to be something great when you put forth the extra time. If you've ever rushed to complete a deadline and misspelled a word, or didn't exactly follow the guidelines for a project and ended up looking sloppy to your client, you'll understand what I mean when I say, "slow down." Take some time out of your day to ensure quality and proof read everything you write. Your clients will not only take notice, but they'll respect you more in the long run.

Up until Anderson’s most recent praise for The Grand Budapest Hotel, he didn't have much success in the awards department. He’s often criticized for his signature style and for his portrayal of minorities while his stories center mainly around the lives of the privileged. (Source.) Out of all the director’s films to receive harsh criticism, The Life Aquatic with Steve Zissou is at the top of the list. In a New York Magazine article featuring Anderson, they described the movie as a “beautiful failure, a study in style stripped of substance.” It didn't help that the majority of his earlier movies struggled to attract an audience large enough to earn back the massive expense that occurs to bring his visions to life. Anderson’s latest two movies Moonrise Kingdom and The Grand Budapest Hotel, however, went on to be huge box office successes. (Source.)

At some point in our lives, we'll all experience setbacks and criticism. The most important thing is what we do with it. Some people use this as a crutch and revel in the attention onlookers give them, while others treat it as another lesson learned in life. Think about what you could gain if you embraced your failures, surrounded yourself with like-minded people, and moved forward. Wes Anderson stayed true to his aesthetic and gained a loyal audience along the way. If he can do it, why can't you?